Roquevale has two estates in the county of Redondo, with a total area of ​​vines that surrounds the 135 hectares.
Herdade do Monte Branco, with soils of granite origin, is fundamentally directed to the production of white grapes (Roupeiro, Fernão Pires, Arinto and Rabo de Ovelha).

The Herdade da Madeira Nova de Cima has red shale soils and is dedicated to the production of red grapes (mainly the region's grapes: Aragonez, Trincadeira, Alfrocheiro, Castelão, Alicante Bouschet and Tinta Caiada), with the latest introduction of Touriga National, Touriga Franca and Cabernet Sauvignon.Roquevale joined the headquarters and winery at the Herdade do Monte Branco, between Redondo and Serra D'Ossa, on the road to Estremoz, about 25 minutes drive from Évora.

The winery is now able to vinify 3.5 million kg of grape per year and has a bottling capacity of 6,000 bottles / hour and 600 bag in box / hour.
The highest quality wines are stacked in French and American oak barrels in a large basement, where the wine is bottled.
The wine-growing region of Redondo is one of the eight sub-regions of the Denomination of Controlled Origin (D.O.C.) Alentejo. The climate of this region is Ibero-Mediterranean, that is, a Mediterranean climate with strong continental influence. It is characterized by the occurrence of hot and dry summers, high thermal amplitudes with sunshine close to 3000 hours / year. Precipitation, concentrated in the winter months, is in the order of 550-600 mm / year. The predominant soils in the region are derived from granite, but the area of ​​vineyard is already considerable in shale-derived soils. 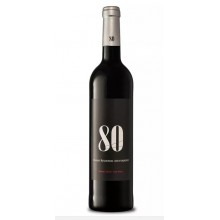 arrow_upward
Hi! Click one of our agents below and we will get back to you as soon as possible.