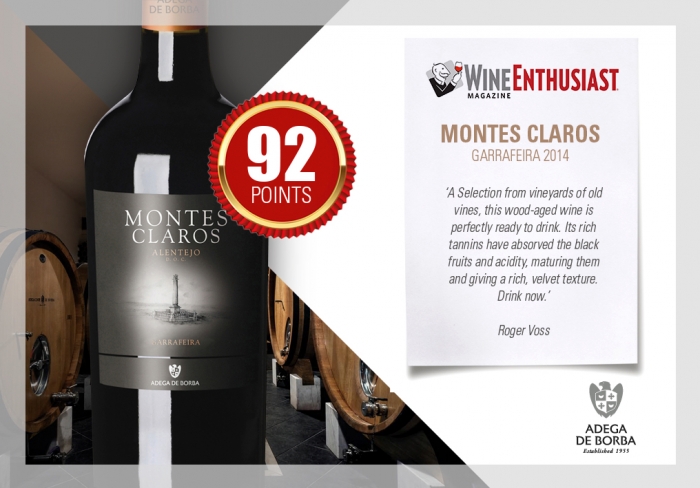 Montes Claros “Garrafeira” was produced from a previous selection of old vines planted in schist soils with a rigorous control of the productivity of the process involved an extreme care in the production of grapes with extreme quality.After the grapes arrived in the winery they were smoothly crushed with total destemming after which the alcoholic fermentation in stainless steel lagares (wine presses) took place by using a moderate mechanical - der a controlled temperature of 24ºC.The malolactic fermentation occurred in 1st use French,American and chestnut oak barrels with a 12-month ageing for 30 months in the bottle.

Borba is a very old settlement, dating back to the era of the Roman occupation (1st/2nd Century AD.)

Built by order of D. Dinis, the main purpose of the castle of Borba was to protect the borders with Castela, thus reinforcing the treaty of Alcanices (1297) after the victory of D. Alfonso II of Portugal over the Moors in 1217.
Immediately after the conquest Borba was handed over to the Military Order of Aviz. On July 15th 1302 D. Diniz granted it its first charter, constituting Borba as a municipality, liberating it from the municipality of Estremoz.

Winegrowing in the region dates back to the Roman era. It was a complementary activity to the diversified agriculture of the region throughout the Middle Age.

Nonetheless, at the end of the seventeenth century winegrowing became the main agricultural activity of the region having been responsible for a period of great development and wealth for the region. From this moment on wines from Borba started to stand out among other wines form the Alentejo and throughout the country thanks to their high quality. During that period high prices were paid for Borba wines.

Borba’s prosperity during the seventeenth century is entirely related to wine. It even caused a significant illuminist movement, visible even today in the architecture of many manor houses. It was during this period that the treaty of Methuem allowed the tax free export of wines to England, making Portuguese wine quite more competitive than French wine, thus stimulating the production in various regions, including Borba.

Halfway the nineteenth century the production of wine, up until then produced in earthen vessels, was awaken by a technological breakthrough as a result of the Industrial Revolution. Rectangular stone vessels, presses and other winery equipment appeared in certain family-owned wineries. The palaces once owned by these families still represent an important architectonic legacy of the city of Borba.

At the end of the nineteenth century phylloxera destroyed a great part of the vines. Many parts of the destroyed land were cultivated with olive groves. At the beginning of the twentieth century new grape varieties were planted, using the technique of grafting. Wine production was then reborn.

The Adega de Borba was founded in 1955 by a group of dynamic winegrowers. Their main goals were to bring the wine to the consumers, increase the profit margins and optimise the production.

Borba is located in the centre of a particularly picturesque region with an abundance of water. The municipality covers an area of 142.88 km2 distributed over four communities, with a population of about 8500 inhabitants.

The municipality of Borba is located in the heart of the Alentejo at an altitude of about 416 meters in the depth of a circular valley – thus benefiting from a specific microclimate – and in the middle of the calcareous massif that characterises the northern Alentejo, better known as the region of marble.
Concerning its geographical location in the context of an urban network the city of Borba is located in an equidistant place between two major cities of the region, Évora and Badajoz (around 50 km to each city).